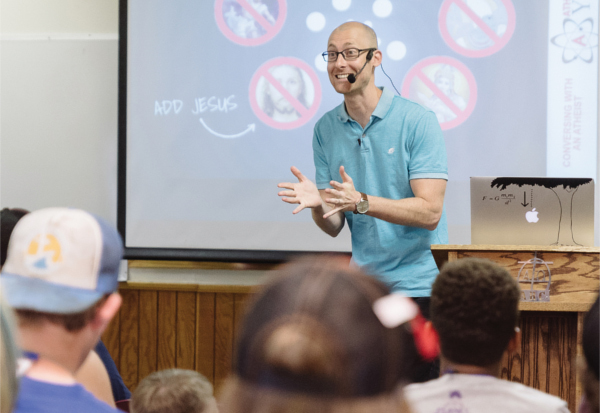 I had the privilege of attending FLY Beyond, the AFLC national youth equipping conference, in July and representing the Bible school there. There were many things to be studied, fun games to be played, and friendships to continue and start. The core morning sessions were led by Tim Barnett from Stand to Reason, who talked about apologetics, or, reasoned arguments for our faith. None of the students were prepared for how he was going to enter his first session.

On the first day the students sat down and prepared for another enriching session. Little did they know that Tim had a surprise for all of them. Tim introduced himself as an atheist. Shock entered the hearts of every student—and every one of us counselors, too. How could the youth board’s leadership possibly let an atheist in here to speak? Did he just recently become an atheist, and nobody knew? Why is he speaking to us?

So many questions entered each of our minds while Tim started digging into his course content; he explained why he was an atheist for eight specific reasons. Then he opened the session up to a Q&A, challenging students to ask questions based on the eight reasons why he didn’t believe in Jesus Christ. Students were quiet at first as they were still a bit stunned at the current events. Then, after a question or two, students began quickly raising their hands to defend their faith. After many questions and about 40 minutes into the 50-minute session, Tim revealed his secret: He was a Christian. He had played a role to get a response from his listeners. Whether people liked the tactic or not, afterward many appreciated how he got people thinking about questions they can use to start discussions with their non-believing friends.

What inspired me the most was this: Tim spent almost the entire first session playing the role of an atheist and only a few precious minutes as himself. Amazingly it only took him a few minutes to refute every argument he had used against Christianity when he was acting as an atheist. He had so much confidence in the Lord that he could say all those things and then later show why they aren’t true and why Jesus is the truth.

The rest of the week, Tim walked us through ways to defend our faith. In many ways, apologetics is about asking questions and not attacking others with information. I believe this crash course for the students was a fast-paced way for them to learn how to share their faith by asking questions gently and lovingly like Jesus.

Holt, a 2017 AFLBS graduate, is the admissions advisor.

Stepping Out in Faith