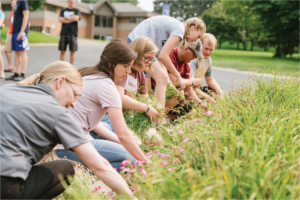 This was not what they expected, kneeling down, fingernails digging into the soil in the nearly 90-degree heat.

As AFLBS summer team members converged on campus on Aug. 11, ending 10 weeks serving in local congregations and camps, they expected to spend the morning in a large-group session talking about what God had done, sharing stories both funny and poignant. That’s what they did every year, right? But after a brief time of sharing, Pastor Wade Mobley led the group of 33 students and five staff members outside, down the driveway to the entrance, and started pulling weeds.

It was an object lesson in service. One last project in a summer of giving.

They may be exactly 20 years apart in age, but Dr. James Molstre and Chad Friestad have been confusing crowds of campus visitors with their similarly pale Scandinavian skin, round facial features, and—how best to describe this?—shorn crowns. Even life-long friends have been known to take a second look before addressing each of them on campus.

While visiting James’ former parish in Pennsylvania, Chad was asked if he was related to their beloved former pastor. Oh my.

But the prize goes to actual family members who mistook one for the other. An uncle, for instance. And Chad’s wife, Christie—not to be confused with James’ wife, Kristin, both dark-haired and also strikingly similar—once mistook James for her beloved husband. You cannot make this kind of stuff up.

You’re looking at the newest reiteration of a classic AFL-Bus t-shirt, spiffed up and now in the hands of a new generation of students. The now vintage design was first introduced in 2011, when a group of AFLBS students and alumni hosted a promotional session at the FLY Convention. Their skit came complete with a cardboard cutout of the
AFL-Bus. Kitsch. But the limited-edition t-shirts were a hit, and difficult to procure. I’ll take one of these, for sure.

In the Local Congregation

Stepping Out in Faith