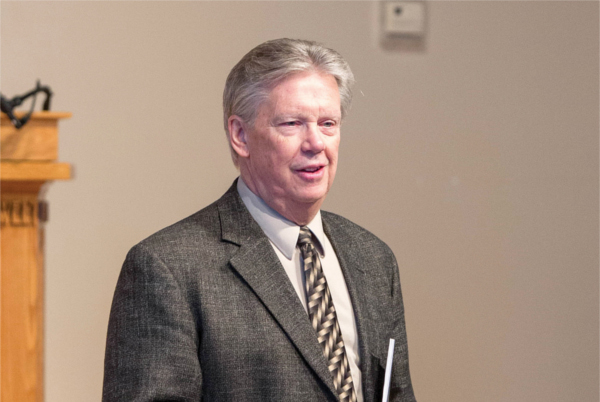 The AFLBS choirs had a unique opportunity this year to, very literally, sing a new song to the Lord. The story began almost two years ago when AFLBS choir director, Andrew Hanson, was approached by Deo Cantamus, a non-profit organization of Christian musicians in the Twin Cities. Their director, Al Hawkins, proposed a joint commissioning of an original work by local composer Lloyd Larson. After prayer and further consideration, Hanson committed AFLBS to the project.

Although the work, titled The Hallel, is not set to be published until late 2019, the choirs received access to it at the start of the 2018 school year. The word hallel, meaning “praise” in Hebrew, is the name given to the text of Psalms 113–118. Larson set each Psalm to its own song, creating a 40-minute work of six movements.

Led by Hanson, AFLBS students worked hard to learn their parts during the fall semester. In October 2018, professional musicians from Deo Cantamus joined an AFLBS choir rehearsal to give encouragement and advice. Three of six movements were incorporated into the December Christmas concerts. After Christmas break, the choirs resumed preparation for their spring tours.

On a cold and snowy day in February, Larson himself came to campus to meet both choirs and attend a chapel service. He spoke with the students about his creative process.

“As a composer, you hope that you don’t get in the way of God’s Word. [The music] needed to be something that simply underscored the text,” he said.

After listening to the choirs sing different movements of The Hallel, Larson offered encouragement, constructive feedback, and background to each song. He conveyed how impressed he was with their musical preparation and performance.

Before departing, he offered these thoughts: “Sometimes we associate truths from Scripture with melodies or hymns. Music is a great way to understand the nature of God. My hope is that these students will experience that.”

Both AFLBS choirs featured The Hallel during their spring tours. Singing these texts each night gave students a chance to reflect on what the music has meant to them.

AFLBS junior Julia Albright said, “The Hallel pieces have helped me grow in the knowledge that when we are in distress and pain, we can cry out to Him. God, who truly loves us, will come to us in our time of need.”

Grant Jones, another AFLBS junior, described his experience, saying, “Constantly singing about God’s faithfulness is one of the most impactful things you can possibly sing about. This tour has been pretty tough with a few things going on in my life that have really stretched my faith. But it is so encouraging to always be reminded that Christ is enough and always will be enough.”

Although the tours are now complete, the musical journey is not. The combined choirs presented the full work at the spring concert on May 10. In addition, plans are now being finalized for an event this fall called “Festival of Praise!” This community event will feature a festival choir and professional instrumental ensemble presentation of The Hallel along with a congregational hymn sing.

Hanson offered this reflection: “The entire commissioning process has been a wonderful experience. Not only have we been able to support the creation of new music, we have also felt a sense of ownership of this work. Meeting the composer and gaining insight to his compositional thought process has enriched the meaning behind the texts. I have been moved to deep emotion—joy, gratitude, tears, humility, servitude—singing these songs of praise on tour day after day.”

Josh Johnson [AFLTS junior] is the recruiting and communications coordinator for the AFLC Schools.

Update 6/28/19: This work will be featured at the Festival of Praise! event held on Sunday, October 27. Click here for more information about this event.

Kinship is a magazine of the Free Lutheran Schools. Stay up to date on the latest news, student stories, classroom highlights, and fun tidbits about life on the AFLBS and AFLTS campus.

Life with the Light