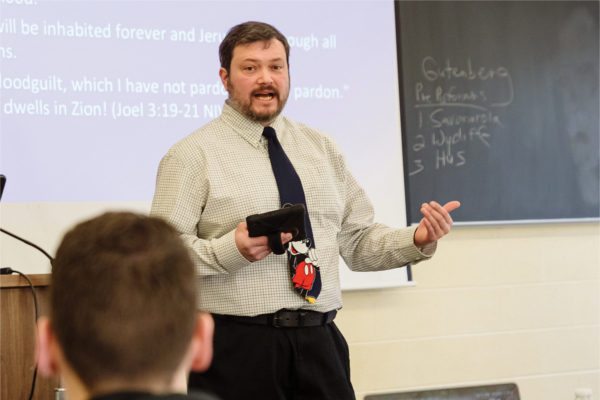 In Colossians 1:16–17, we read a clear and succinct description of Jesus, by whom all things were created, and—more significantly—“in Him all things hold together” (NAS). God is described as sustainer of all things (and His people) in the New Testament. Because God is amazingly consistent, we find Him similarly portrayed in the Old Testament.

In Genesis 1 and 2 we read that God made the heavens, earth, and creatures, “very good.” After the fall, though God pronounced the curse upon the man, the woman, the serpent, and all of creation, this was not the end. The woman would bring forth her children in pain and/or sorrow; nevertheless, she would still bring forth children. The man would bring forth food from the earth in similar pain and/or sorrow—nevertheless, they would still eat. More significantly, One was promised to come who would someday crush the serpent’s head—an ancient prophecy of God’s promised Messiah, our Savior.

Most significant, however, is how God showed Himself to His people. Most of us know that He revealed His Name as “I AM.” The next verse adds something less often remembered: that the LORD (I AM) is the God of Abraham, Isaac, and Jacob; this is His Name forever, and how it is to be remembered by all generations (Exodus 3:14-15). He didn’t just give a name, but a name that was illustrated by His relationship with these men. To know the LORD and who He is and what He is about, take a look at how He handled those men.

We often celebrate these men and their faith—and we should. We don’t often remember how much they wavered in their faith, how much that faith really was the result of God looking after them—sustaining them—in this life. Abraham was too faithless and chicken to risk his own life defending Sarah; God had to rescue and return her to him—twice. Isaac followed in his father’s footsteps, along with having his own issues. God carried both of them through their faults and misadventures, and they learned that they could trust Him.

Jacob didn’t start out any better. When he fled from his home (without much more than a walking stick to his name), God promised to be with him. The best Jacob could respond with was, “If God will be with me and will keep me on this journey that I take, and will give me food to eat and garments to wear, and I return to my father’s house in safety, then the LORD will be my God” (Genesis 28:20-21). If, he says, God sustains me, then He will be my God. The LORD delivered on that. He blessed, protected, and provided for Jacob lavishly. By the end of his life, Jacob described the LORD as “the God before whom my fathers Abraham and Isaac walked, the God who has been my shepherd all my life to this day” (Genesis 48:15).

Jacob knew shepherding well: he was one. To call God shepherd means that He is not simply some distant maker, or eventual judge. He isn’t the creator of life principles for people to follow in order to get the best life. A shepherd is a continual protector, provider, comforter, rescuer … the list goes on. It is a fundamentally relational role, on a day-to-day level. This daily, sustaining shepherd has made us, and will judge everyone—but He is our good shepherd, watching over us, and carrying us through this life, while teaching us faith: the truth that we can trust Him. This is God, revealed to be at work from the Old Testament through the New, to today.

Kinship is a magazine of the FLBCS. Stay up to date on the latest news, student stories, classroom highlights, and fun tidbits about life on the FLBC and FLS campus.

Resting in Our Lord’s Sustaining Promises