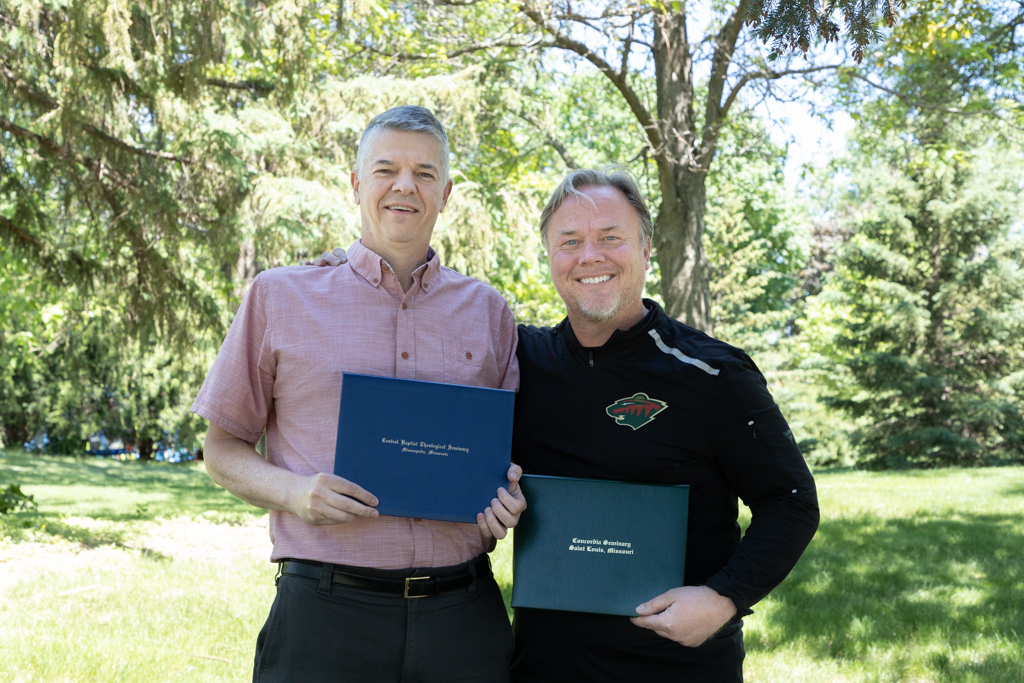 FLBCS graduates were not the only ones to receive academic recognition this spring. After many years of intensive study and research alongside regular teaching duties at FLBCS, Pr. Jerry Moan and Pr. Brent Olson completed their doctoral training. When asked to reflect on their studies, both men say their experience goes to show one should never stop learning.

Moan started coursework at Central Baptist Theological Seminary (Plymouth, MN) in January of 2016. He chose the program, in part, because of its practical preaching focus. This fit well with his work at the Free Lutheran Seminary, training men to faithfully preach the Word in the congregation. After Moan completed the necessary courses, he turned to a final project that tested new ways of teaching the book of Acts at the Bible College. “I wanted to increase student participation in the learning process and help them to remember scriptural truths for a lifetime.” Moan assigned students to “traveling teams” that huddled for small group exploration, created dramatic Scripture presentations, practiced inductive Bible study methods, etc. Moan reported enthusiastic engagement from the students. “Everyone seems to agree that variety is still the spice of life. So I would try to break up the class sessions into chunks in order to allow tired brains a chance to shift gears and refocus their attention.” After submitting his dissertation project this spring, Moan received his Doctor of Ministry (D.Min.) degree during a ceremony at the Central Seminary campus last week. Moan stated, “Through it all, the Lord has graciously renewed the vision for my calling as a teacher and refreshed my desire to make an impact in the lives of my students.”

Pastor Brent Olson recently traveled to St. Louis Missouri for the commencement ceremony at Concordia Seminary where he received his Ph.D. in Old Testament Exegetical Theology. This was a momentous occasion for Olson who began his doctoral studies two years prior to joining the faculty at FLBCS in 2011. In addition to the extensive coursework and the 5 language exams (Hebrew, Aramaic, Greek, German, and French), Olson spent much of his time researching and defending his dissertation topic. “I studied the impact that the worship of Baal-zephon, the Canaanite Storm-god, had on the exodus event, particularly the Red Sea Crossing. I argue that Exodus 14-15 are functioning in part to demonstrate the LORD’s superiority over Baal-zephon, one of the chief Egyptian gods at the time of the exodus and the LORD’s principal rival for the hearts of the Israelites throughout Old Testament history.”

There were several points along the way that Olson faced discouragement and opposition. One of the foremost experts in this area of Biblical scholarship initially refused to give his approval. “There were many times I wanted to quit,” said Olson, “but my parents will tell you, the LORD gave me the gift of stubbornness. But more than that, the LORD gave me encouragement, oftentimes when I thought I just wasn’t going to make it.” Olson tells of one Sunday morning in April of 2018, during an especially challenging week, when he happened upon a sign posted in his church building with words that seemed to be written directly to his situation, “The LORD will fight for you; you only have to be still.” “I knew that verse well and should have been taking it to heart. Exodus 14:14. It’s what Moses says to the Israelites at the Red Sea when they’re freaking out over the overwhelming opposition posed by Pharaoh’s army on one side and the roaring sea on the other. I printed up this verse and taped it to the side of my coffee table. On August 24 of last summer, I gazed at this sign often while I was defending my dissertation via Adobe Meeting while sitting in my living room. I gave this sign special notice when the professor who’d opposed me so adamantly three years before (and had continued to for the next three years, too) started his time to question me. He began, “Brent, before I start, I want you to know that I have told your advisor that I am going to pass you.” God’s hand of blessing was evident in bringing the doctoral studies of now Dr. Moan and Dr. Olson to a successful end. Dr. James Molstre, Dean of the Seminary and Chief Academic Officer said, “These men are valued members of our faculty. Recent accreditation is one of the reasons that we are excited about the completion of these degrees. But more importantly we want our faculty to continue to learn and grow as instructors of God’s Word.” Moan and Olson will continue to serve the mission of FLBCS as they seek to establish students in the eternal and inerrant Word of God.