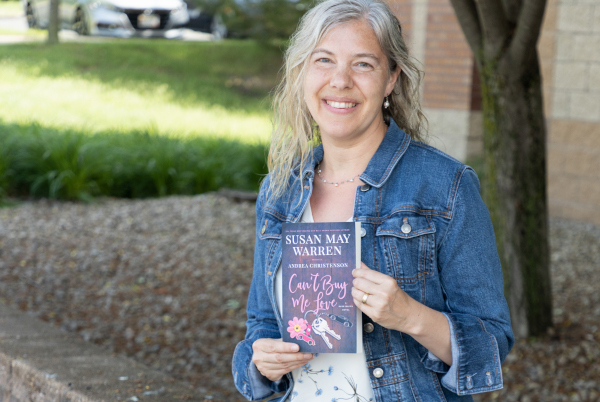 Growing up, my superheroes had always been the people who brought my favorite fictional characters to life. That’s right, authors. From A. A. Milne to C.S. Lewis, and Carolyn Keene to Janette Oke, these writers and the stories they dreamed up held more interest for me than the bravest caped crusader.

This year, on March 16th, as my first novel officially launched into the world I joined their ranks and became what I so admired, an author.

My journey from ordinary citizen to author held a few twists and turns. I’ve long wanted to write stories that reach people’s hearts and show them God’s love. And, to that end, over the past decade or so, I’ve been working on the craft of writing fiction.

Fiction provides a unique opportunity to teach truth. Far more than simply entertainment, you can show people walking out their faith on the page. Christianity can become more practical when you see it being demonstrated in story. Empathy is learned as you read of experiences which differ from your own. For these reasons I love writing and reading fiction.

As my knowledge of the craft grew, I began looking for opportunities to turn my ideas into novels for publication. I attended classes and conferences, and joined writing groups. I entered contests and submitted proposals. I knew God had placed a desire to write within me and He wanted to use it for His glory.

In November of 2019, I got the call. My proposal had been selected, along with two others, for a new series of books which would be co-written with a writing hero of mine, Susan May Warren. I, and the two other authors selected, would join Warren in creating six new stories (two each) set in the fictional world of Deep Haven which Warren had already established.

To say I was thrilled would be like saying the sun is warm or cats enjoy catnip. Words have not been developed for the excitement I felt. My contract stated that I would need to write two 60,000 word novels in 2020. Yes. That 2020. Little did I know at the time how much my life was about to get upended.

About a week after I signed my contract my husband, Eric, was offered a job at the AFLC schools. Our minds began whirling. Could God really be calling us to so many new things at one time? We asked for some time to seek His will and to make some decisions. By the beginning of the new year, we knew His call was clear. We would be moving our family to FLBC and I would be writing my debut novels. Eric’s first day on the job would be June 1st—the same day my first manuscript was due.

In the year and a half or so since signing that contract our lives have radically changed. New jobs, new home, new state, new everything. The one constant was knowing we were held in God’s hands.

Writing a novel feels a little like taking your heart out of your chest, placing it on a silver platter, and offering a slice to anyone who passes by. I am eternally grateful for God’s goodness to me, providing supportive friends and family, and His promises to me that my worth is not found in what I produce, but is firmly rooted in what He has done for me.

As I’ve gone on this writing journey I’ve discovered something. Writers are not superheroes in the way that I once thought. They are not magical beings producing content at the snap of a finger. They are simply ordinary people who are willing to allow an extraordinary God to use their talents in a way that glorifies him and edifies readers. I know because I am one of them.