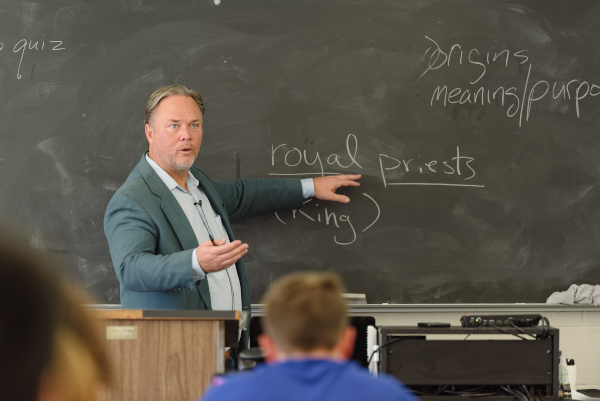 Some of us may misunderstand Matthew 6:33, thinking, “If I seek the Lord’s kingdom and righteousness, then He will give me whatever I want—as long as it doesn’t go against His Word, of course.” But what happens when the quid pro quo we’ve constructed doesn’t play out in our lives? It’s easy to slip into bitterness and resentment. When our expectations get disappointed, the human default seems to be to doubt God’s faithfulness to His promises and, especially, to doubt His wisdom and goodness.

Eliciting this faithless response, as it’s vital to recognize, is Satan’s well-worn scheme. We remember how the great deceiver used it on our first parents: “For God knows that when you eat of it [you won’t surely die, but] your eyes will be opened, and you will be like God, knowing good and evil” (Genesis 3:5). In Coming Home, Pastor Joe Stowell, former president of the Moody Bible Institute, elucidates Satan’s move here: “Satan’s strategy was to seduce Eve, and subsequently Adam, into believing two lies: (1) that God is not generous and good but rather oppressive and restrictive (and 2) that life is best and most expansively enjoyed when self is at the center …”

Many times during my life, I’ve been tempted, and often successfully, to handle disappointment by being angry with God. I wanted something, and God didn’t give it. So, in my mind, God was being unwise or unloving. But this isn’t the picture the Bible reveals of God at all. It certainly isn’t the picture Jesus presents in Matthew. In 6:11, He tells His disciples to pray simply, along the lines of, “Give us this day our daily bread.” Why? Jesus says, because your Heavenly Father is very wise. “[Y]our Father knows what you need before you ask him” (6:8). A little later, in 7:11, Jesus again extols the Father’s wisdom and goodness in answering prayer: “If you then, who are evil, know how to give good gifts to your children, how much more will your Father who is in heaven give good things to those who ask him!” Simply, the Heavenly Father knows how, and wants to, give good gifts to His children.

In sum, I’ve learned from reading God’s Word and through the experience of living itself that, first, the Lord’s agenda may be different than mine and, second, that His agenda is better, however difficult that is to accept at times. So, when I’m tempted to think angrily and haughtily, “GOD ISN’T DOING A VERY GOOD JOB RUNNING MY LIFE AT ALL,” I’ve learned to pray the prayer Pastor Timothy Keller prays, “Lord, save me from the melancholy burden of assumed omniscience.”

And when I’m tempted to doubt God’s goodness, I remember what my friend Mark once told me. Mark had been severely injured in a car accident at age 18 while out drinking with his buddies. When he woke up from a year-long coma, he learned that his family had basically abandoned him. He discovered, too, that he was now blind. But, most importantly, he found out that a woman (Ruth) from a local church (Ruthfred Evangelical Lutheran, Bethel Park, Pa.) had agreed to adopt him. She then faithfully brought Mark to her church where he became a faithful follower of Jesus Christ.

He told me 20 years after his accident, “Pastor, I know it sounds strange, but I’m so thankful for my accident. It was a great gift of God, because without it, I wouldn’t have met Ruth, and without Ruth, I wouldn’t have met Jesus.” I realized that for Mark, the Lord’s agenda had become his agenda. The testimony of this insightful blind man has played a vital role in my own desire to seek first the Lord’s kingdom and His righteousness, knowing that I will receive the very best gifts from an unfathomably wise and good Heavenly Father.