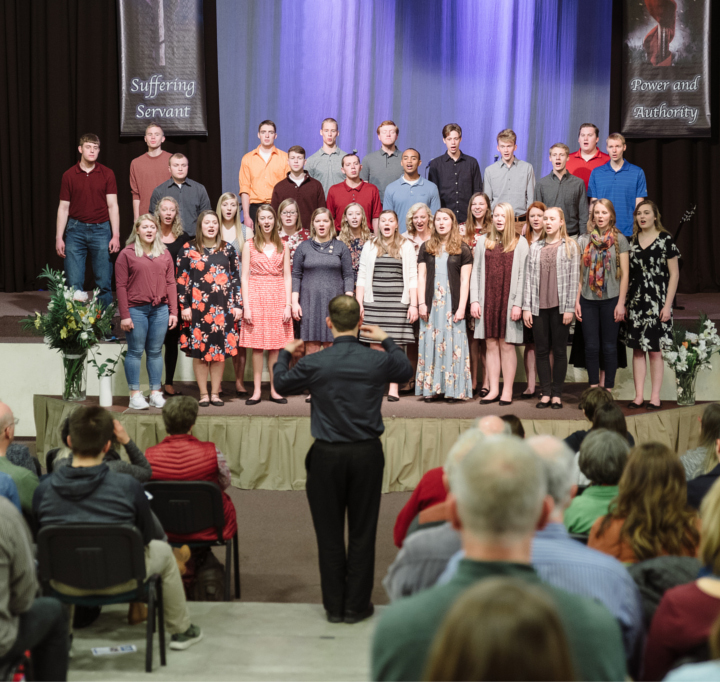 It was such a joy to welcome my alma mater to Budapest, Hungary. So many memories came flooding back from my own European AFLBS choir tour 17 years ago. Memories of laughter, experiencing new cultures, but also ways in which the Lord made Himself known and taught me things that still impact me today. My time at AFLBS was so influential to help me build a firm foundation in my biblical knowledge. The congregation in Budapest was encouraged and blessed as the choir voices filled the sanctuary with praise to the Lord. Having the choir visit was a reminder of the importance of digging into God’s Word and His faithfulness as we serve Him wherever He calls us.

Laura Finstrom [AFLBS 2002] is a mathematics teacher at the International Christian School of Budapest.

One of my favorite experiences from this trip has to be our time in Slovakia. This, with no doubt, has to do with the fact that while we were there we spent much more time getting to know the people. This was also the only time that we stayed with a host family. A lot of our host families didn’t speak a word of English, but God showed us that He is greater than any language barrier. The connection of being brothers and sisters in Christ is all you need to form deep relationships with people through whom you can barely communicate through language. The people we met in Slovakia were hospitable, generous, friendly and overall amazing. I would go back in a heartbeat.

Our time in Prague can be highlighted as the “getting to know you” phase of the Companion Tour. The welcome dinner with the students was a truly delightful event, including the students’ enthusiastically shared stories about their tour experiences—with people, foods, and shopping—and several musical excerpts revealing their talents, heart, and creativity as a precursor to what we’d hear in upcoming concerts.

Joining with different small groups of companion tour folks on each of several extended walking excursions including sights in Oldtown, a riverfront market, crossing Charles Bridge (at least four times), Prague Castle, and searching for a place to have an authentic Czech dinner (I ate roasted rabbit for the first time) set the stage for building new connections with a fantastically interesting group of people throughout our subsequent adventures.

Dr. Teresa Gonske [AFLBS 1990] is a professor of mathematics education at the University of Northwestern–St. Paul.

When we crossed the bridge over the Olza River on Easter Monday, I lifted my head to watch our bus go over the water and then went right back to sleep. Our half day in Poland could have easily been as insignificant as crossing the border between Poland and Czech Republic, but our short time there was a great reminder of God’s protection and deliverance.

Though we didn’t visit Auschwitz or the fabled salt mines as planned, we saw plenty of history in Krakow and the border town Cieszyn. The highlight of Krakow was the Jewish Quarter and Oskar Schindler’s enamelware factory. On a plaque outside the factory is a quote from the Talmud that reminds us of the value that God puts on human life: “He who saves one life, saves the world entire.”

This was also a theme in Cieszyn, where we visited and sang a couple songs at the largest Lutheran church in Poland. It was one of the only Lutheran churches for many miles during the communist era. It was very encouraging to see how God has protected and preserved His people and His Word in both of these cities regardless of the difficult circumstances they had to endure.

Part of our AFLBS Companion Tour group visited St. Nicholas Church in Leipzig, Germany, which was founded about 1165. The Reformation was introduced in 1539, and the musical ministry of Bach in the 1700s is celebrated. Today, however, the church is especially remembered for “the miracle of Leipzig” in the fall of 1989.

The city was located in communist East Germany after World War II. A peaceful revolution began with Monday prayer meetings in the church exactly 450 years after the introduction of the Reformation. The authorities tried to squelch the movement by blocking streets and exits, detaining or arresting participants, but still the numbers grew and the church was filled to overflowing.

On October 9, 1989, more than 2,000 people poured out of the church, joined in the streets by tens of thousands waiting outside with candles in their hands … an unforgettable hour! Troops and police were ready, but a decision must have been made to not respond with violence. The peaceful protests continued throughout East Germany, the communist dictatorship collapsed, the borders were opened on November 9, and the country would be reunited.

Effective Board Governance with Scott Rodin

Scott Rodin introduces what a healthy and effective board looks like. He encourages board members…

By: Pastor Paul Kneeland How can a 93 yr. old oak, who lived in only…

In this 5-part video series, Pr. Matthew Ballmann examines what it means to live a…

Provide your email address to receive regular updates about FLBC